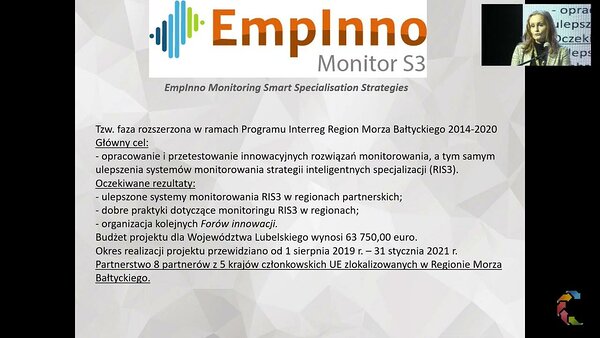 On 20th of October 2020 during The VII National Scientific Conference "Innovations in practice" EmpInno Monitor S3 project partner Malgozata Brodzicka was talking about the EmpInno project. The main aim of the conference is to popularize the importance of new scientific achievements, as well as to exchange experiences and integrate students, doctoral students and young scientists. The result of participation in the event is the opportunity to establish contacts with entrepreneurs, create interdisciplinary teams and define areas of their possible cooperation. During this conference, the Marshal's Office of the Lubelskie Voivodeship had its panel about the voivodeship, initiatives taken in it, including international projects, of which they are a partner, so that there could not be missing information about The EmpInno and its influence.

The panel of the Marshal's Office was aimed at disseminating knowledge about The Interreg projects, including the Interreg Baltic Sea Region, and EmpInno Monitor S3 as well, among the RIS3 interests to increase the level of innovation and competitiveness of the region. The audience was able to see the benefits of them directly and indirectly from Interreg projects and how they can improve the implementation of RIS3, which determines the direction of EU funding support for the development of innovation and helps us gather information on the support of the RIS3 monitoring system.

*Picture: A screenshot of the online broadcast.